Our survey results showed that only 12% of respondents said that they spent most of their time working on topics related to company culture. However, 20% believed that company culture was going to be one of the major HR topics in 2020. 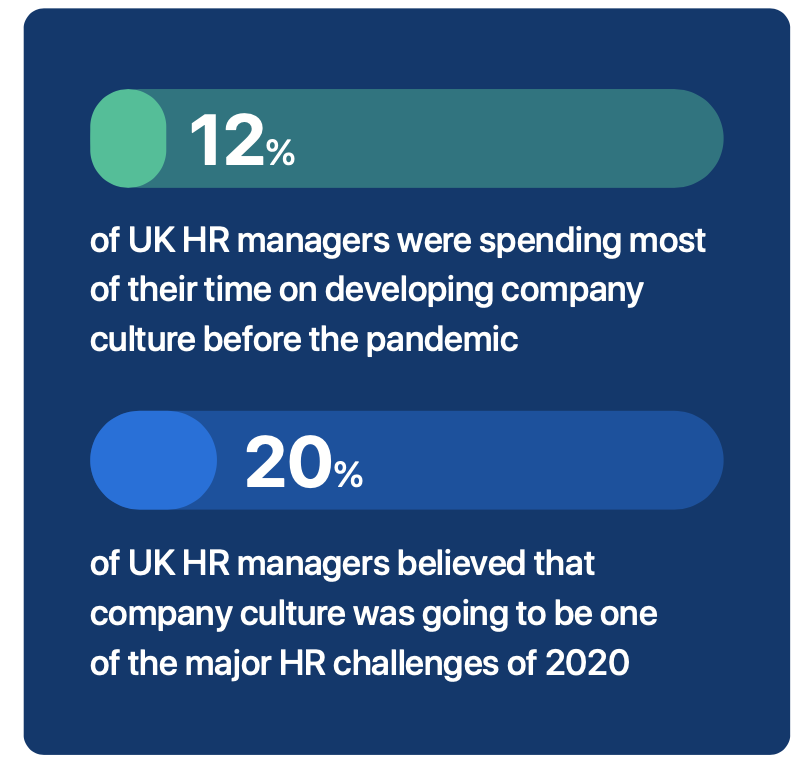 If anything, the coronavirus crisis has made company culture more of a priority for organisations than ever before.

With the majority of people having to work remotely, many organisations have been redefining their company culture and looking at ways of adapting it to work in a post-coronavirus world.

Culture is, by nature, completely intangible. However, the elements that help compose it – e.g. offices, people and leaders – are not.

What is company culture?

Even before coronavirus it was difficult to define, but in the context of remote work where physical encounters with colleagues are not feasible, many companies are discovering that the previous constructs of their culture no longer exist and, consequently, the way they look to build company culture is having to be completely remodelled.

“Up until now, so much of a company’s culture has been built around the office.”

The change from office-based to full-scale remote work happened more or less overnight.

For more modern organisations that had already implemented remote work, the change, while challenging, was at least manageable. However, for companies that had never implemented such a policy, remote work was being tested for the very first time.

In this context, it is easy to imagine a scenario where people are removed from offices, begin working from home, and are almost instantly forgotten. All it needs is a neglectful manager, a demotivated employee and no protocols in place for managing at a distance.

However, in reality, a significant number of organisations have seen a rise in both employee communication and engagement.

This is largely down to the way that leaders have approached the crisis. A study conducted by O.C.Tanner, a global specialist in corporate culture, revealed a clear link between employee engagement and an increase in organisational and leadership transparency.

Employees in Canada, the US and UK were surveyed and results indicated that increased transparency since the beginning of the pandemic led to an 85% rise in employee engagement.

This increase has manifested itself in different ways, including informal video calls, e-coffees, quizzes and the organisation of online sports sessions. These activities have helped to foster a new kind of company culture and might perhaps be classed as observable artefacts of a new, post-coronavirus, type.

Organisations have also looked at more formal ways of engaging with employees, typically through the use of surveys.

In a webinar we ran this summer with Culture Amp, attendees discussed how employers and leadership teams have used surveys to gather employee feedback and subsequently built and improved on areas of their business.

By listening to employees, embracing their feedback and implementing meaningful changes, organisations have demonstrated their willingness to adapt to the new working environment.

For a considerable time, working habits – getting to the office for nine o’clock, having lunch at midday, packing up and leaving at five – have dictated the way people live.

However, remote work has enabled employees to become more flexible in their way of working. For example, hours are less regimented and there is no longer the need to rush to catch a train or bus or drive any distance. In essence, starting and finishing times have become much more fluid.

But in becoming more fluid, working habits have inevitably changed. For example, the boundaries between work and home life now no longer physically exist. Employees are now literally bringing their work home with them and there is evidence that people are finding it hard to detach themselves from their jobs.

This is where organisations and HR departments can introduce new rules and regulations that become part of a company’s culture.

For example, employees can be encouraged to log off at a certain time to avoid e-presenteeism setting in. Rules that dictate when emails or internal messages can be sent – e.g. not before 9:00 am or after 6:00 pm – can help companies to build a routine and culture that prevents work from intruding into every aspect of someone’s personal life.

Slack can also help here. Different statuses – e.g. “Working on wellbeing” – can let fellow team members know what someone is doing and whether or not they should be sent a message at that time.

Company culture in the future

Lots of companies are on their own individual journeys to try and rebuild their culture in light of what has happened over the last six months. Consequently, trying to predict what company culture will look like in the future is an extremely complex task.

In all probability, much of it will be dependent on the length of time that remote work has to be practiced and whether there is an appetite for people to return to previous ways of working.

Nevertheless, there are examples of companies that have used the pandemic as an opportunity to rebuild their culture and, in doing so, they have demonstrated that its construction is not necessarily based solely around the idea of office presenteeism. In fact, the presumption that employee engagement is dependent on office attendance has proved to be false.

While team members have been forced apart physically, they have been able to come together virtually through increasing engagement, communication and collaboration.

Discover how HR trends have evolved during the pandemic by downloading our white paper.

Salaries during and after coronavirus

Incentive payments for hiring new apprentices have increased. Employers will now receive £3,000 for apprentices of all ages who join their organisation between certain dates.

While coronavirus restrictions may make holidaying in 2021 seem like a distant dream, it is always worth knowing on which days UK's bank holidays will be taking place.

Despite the significant job losses that have occurred as a result of the pandemic, some organisations have continued to recruit. Discover how they've adapted their recruitment processes and hear from an industry expert on the future of recruitment post-pandemic.

Incentive payments for hiring new apprentices have increased. Employers will now receive £3,000 for apprentices of all ages who join their organisation between certain dates.

While coronavirus restrictions may make holidaying in 2021 seem like a distant dream, it is always worth knowing on which days UK's bank holidays will be taking place.

Despite the significant job losses that have occurred as a result of the pandemic, some organisations have continued to recruit. Discover how they've adapted their recruitment processes and hear from an industry expert on the future of recruitment post-pandemic.